The International Olympiad in Informatics 2017, the programming equivalent of the olympics, recently concluded this 4 August 2017. Medals in the IOI signify great honor as there are only a limited number given away each year. Each country can send at most four participants to compete in this annual olympiad. Hence, a maximum of four medals can be won by a country each year. This 2017, the Philippines brought home two.

The prestigious contest was held in the Kooh e Noor building in Tehran, Iran. Eighty-eight countries sent their delegations to this event. The Philippine delegation consisted of


Widget not in any sidebars


Widget not in any sidebars 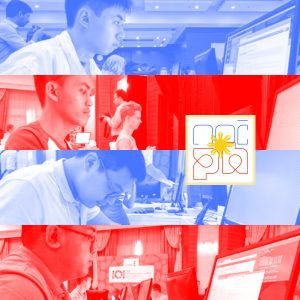 The contest proper was spread out into two days. For each contest day, three tasks, algorithmic in nature, are given and the contestants have five hours to score as many points as they can. To serve as breathers, excursion days are scheduled after each of the contest days. These excursions serve as a way for the contestants to unwind, discover the cultural diversity in Iran, and gain new friendships.

Both IOI veterans of the Philippine delegation were able to score medals this year. Robin Christopher Yu (Grade 12) obtained a total score of 322.03 points out of a maximum possible of 600, 100 of which came from completely solving the wiring task of Day 1. The cut-off score for a silver medal is 249.42 points, thus Robin brings home the Philippines’ first IOI silver medal with a lot of points to spare. Farrell Eldrian Wu (Grade 12), obtained a total of 144.99, netting the country its third bronze medal. 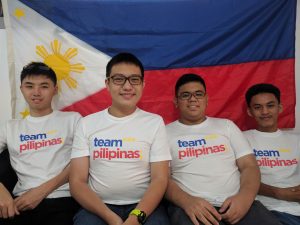 The selection of the Philippine team of the IOI starts as early as January 2017. High school students all around the country like Robin, Farrell, Franz and Kim, registered as early as September 2016 for the 2017 NOI.PH Online Round. The top 30 of this online round were then invited to the 2017 NOI.PH Onsite Round held in Pointwest. The next step of the selection involved the top ten being officially invited to a weekly online training. The trainees needed to read and solve and submit problems assigned by the scientific committee every week. This weekly online training concluded with an In-House training held in Tagaytay, which involved joining the TOKI Indonesian contest, and a contest-style final exam given by the scientific committee. The performance of the students were exclusively determined by their performance starting from the NOI.PH Onsite Round.

Students who are interested in trying out competitive programming are encouraged to leave their email here so that they can be promptly informed of important announcements as soon at the registration for NOI.PH 2018 is open. First-timers are recommended

None of what happened this year would have been possible without our sponsors. The NOI.PH Organizing Team would like to express its gratitude to its sponsors for the help in sending the Philippine delegation to the IOI 2017. In particular, we would like to thank

Finally, we would like to thank the parents for their unending support and appreciation of the efforts of the organizing team and their support and recognition of the hardwork of their passionate children. We made a stopover at a very nice AirBnB in Bangkok.

After more than 24 hours of travelling, we finally reach Iran! 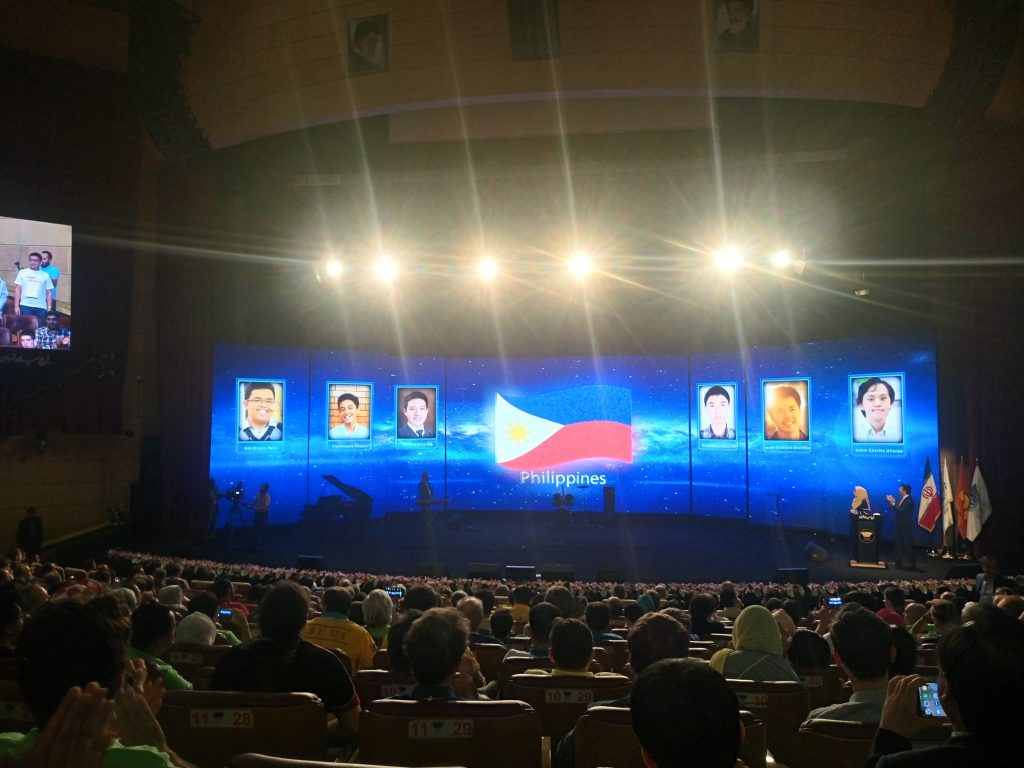 The Philippine team is introduced in the opening ceremonies. 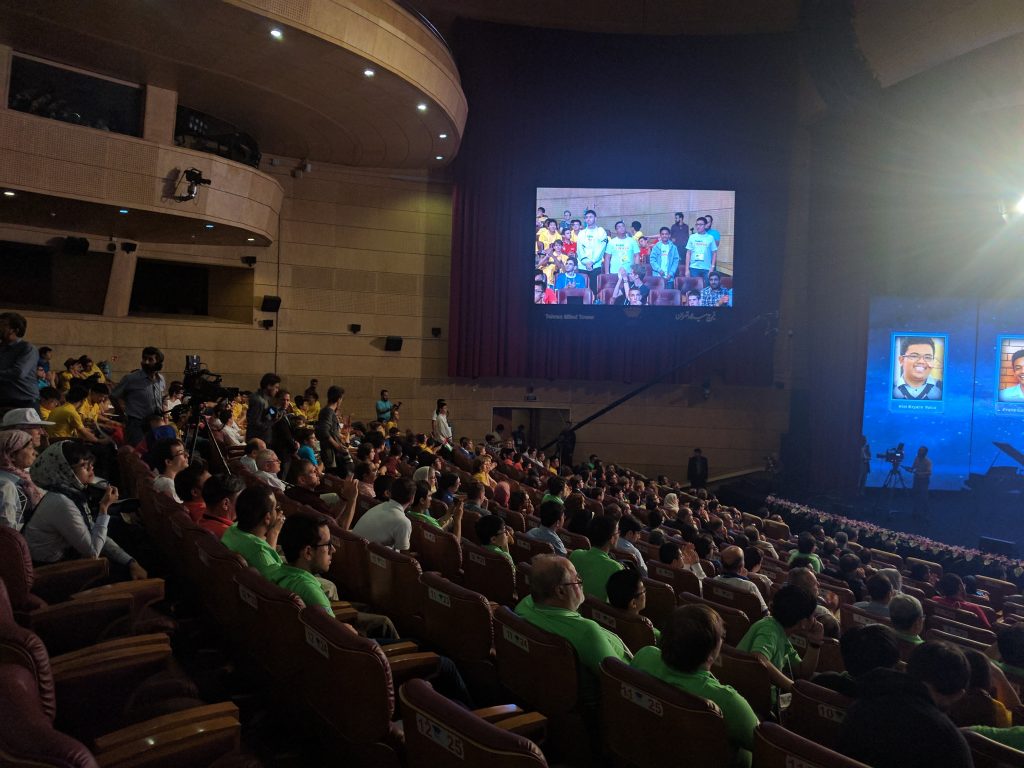 The Philippine team is shown on the screen stage left (not pictured). 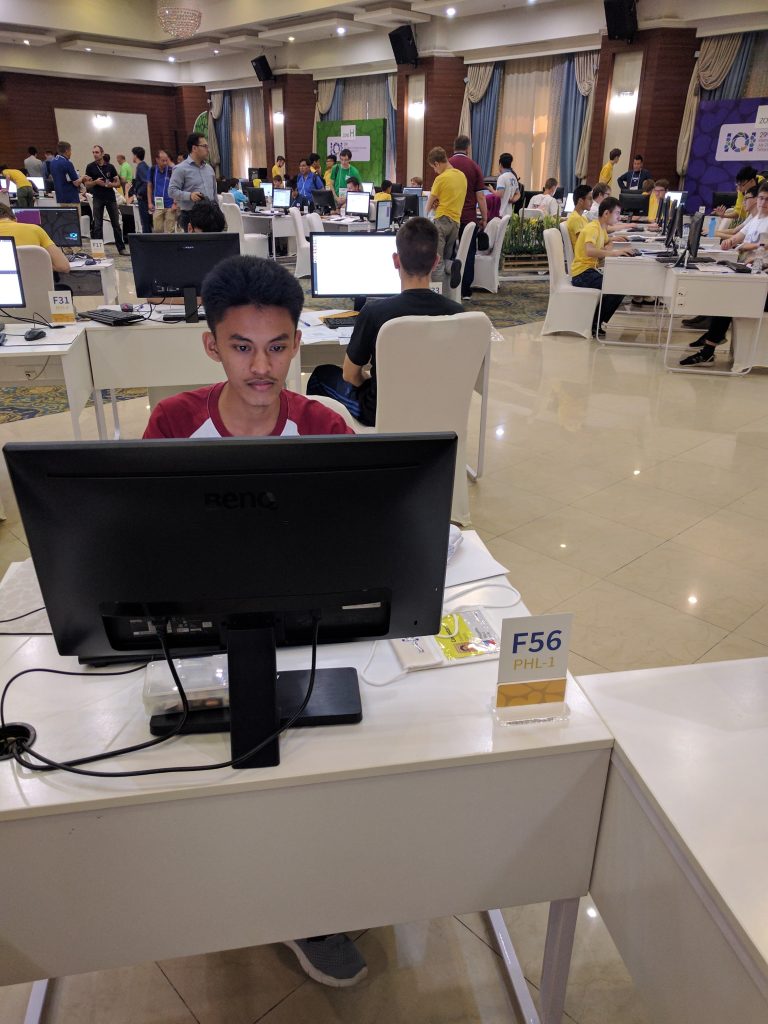 Round 1 starts. Franz looks at the screen and types out the solution to one of the problems. 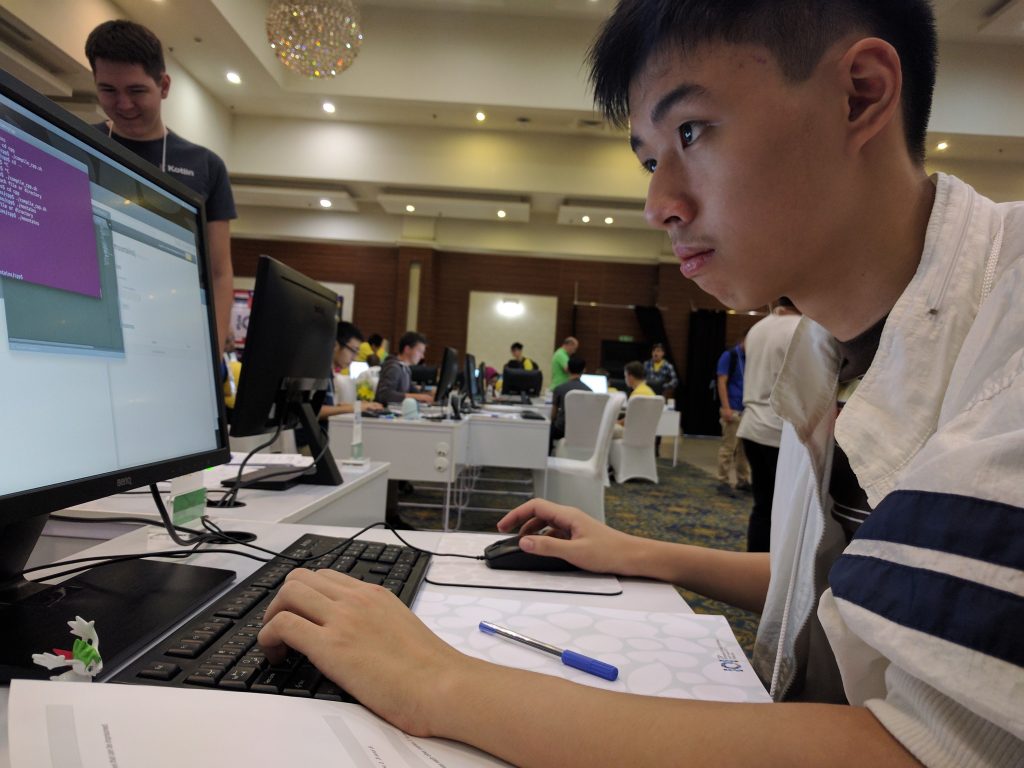 The Pokemon Robin brings represents the correct solutions to the tasks. Because he wants to catch them all. 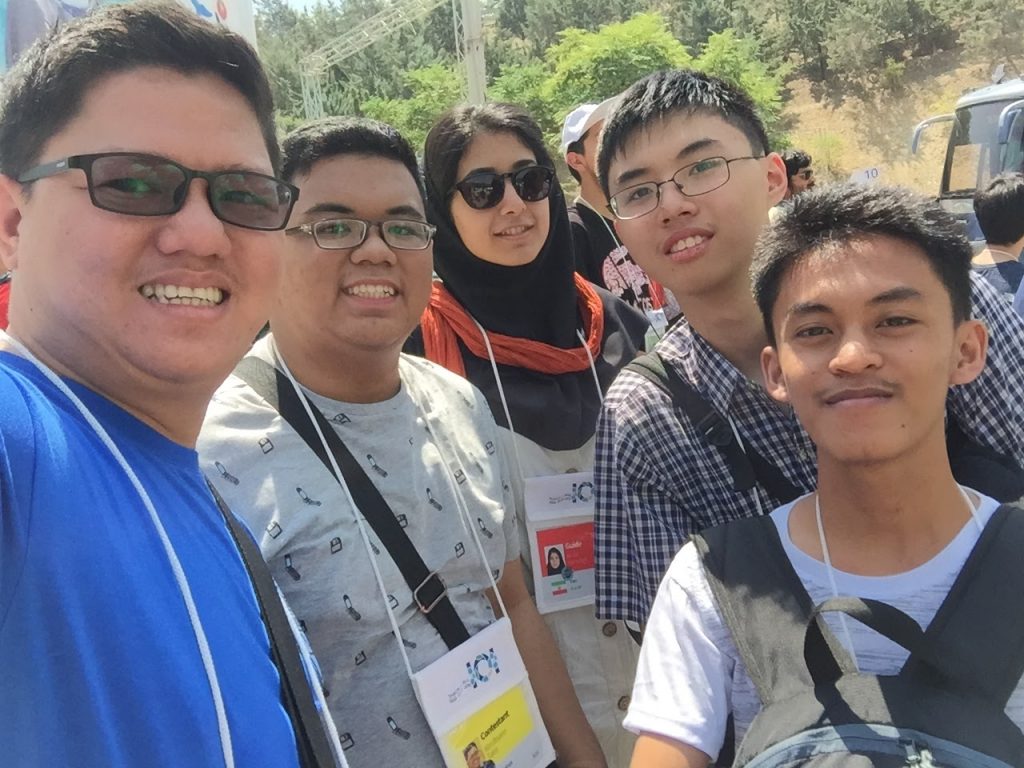 After Round 1, participants unwind by going to an excursion to experience the beauty of Tehran. 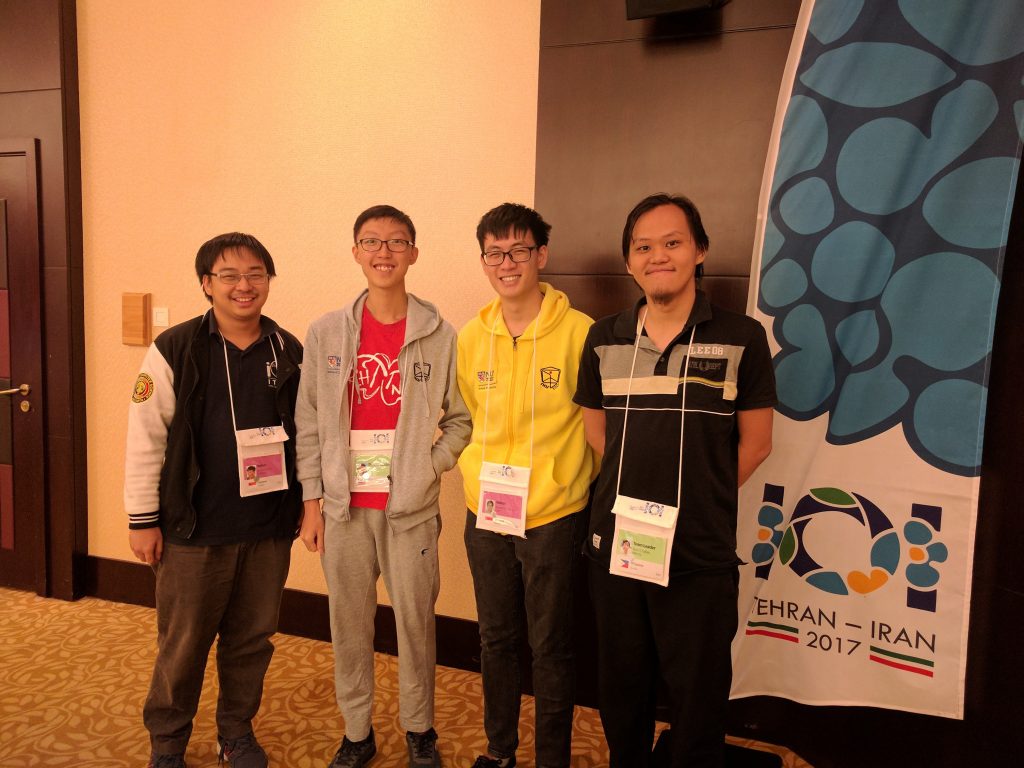 ASEAN leaders pose for a photo during one of the General Assemblies. 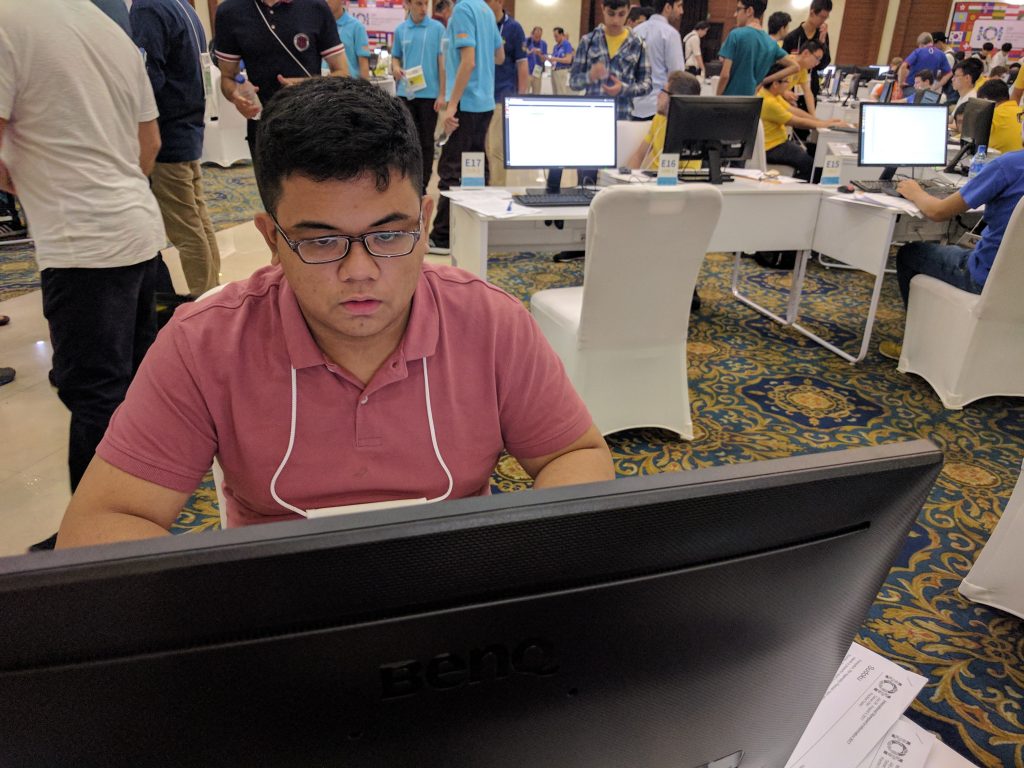 Round 2 starts. Kim starts coding the solution to one of the tasks. Farrell solves on paper before typing. His penguin makes sure the computer is still working. 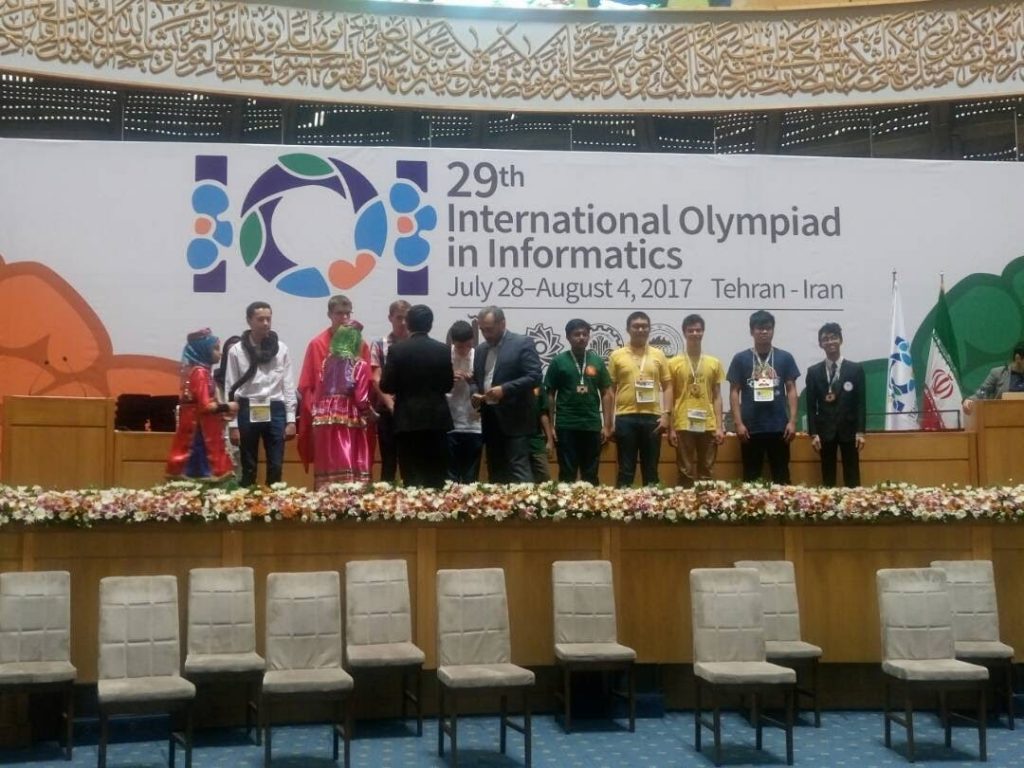 Farrell is recognized on stage with other bronze medalists. 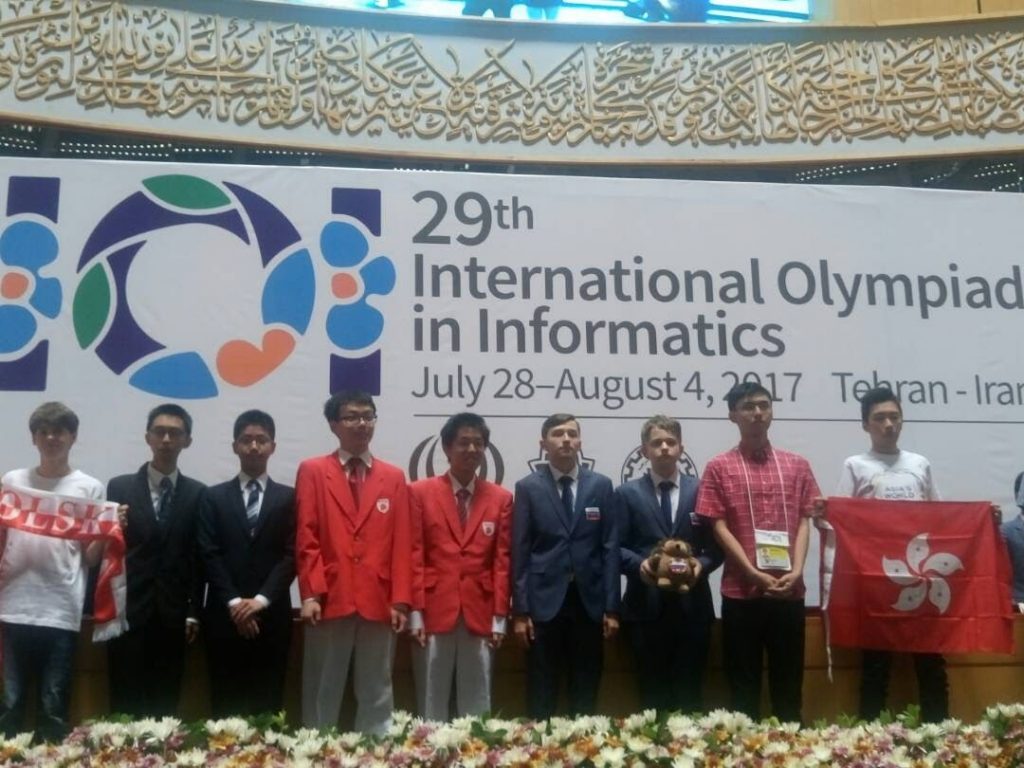 Robin is called on stage with other silver medalists. 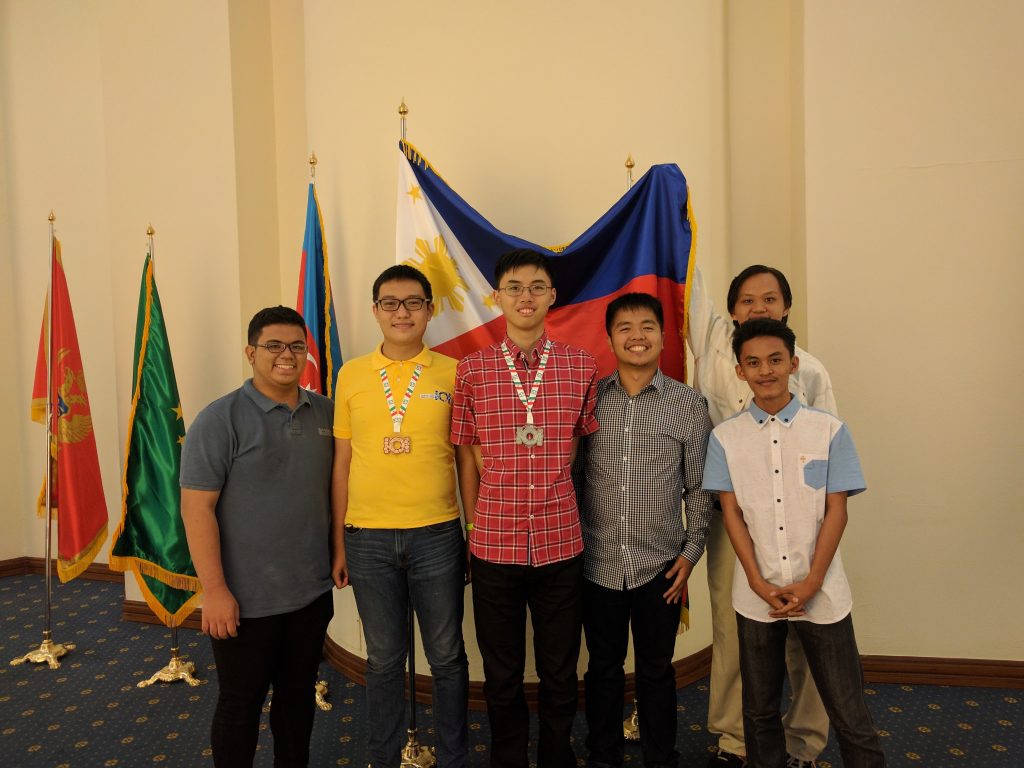 The Philippine team poses in front of a Philippine flag just outside the closing ceremony hall. 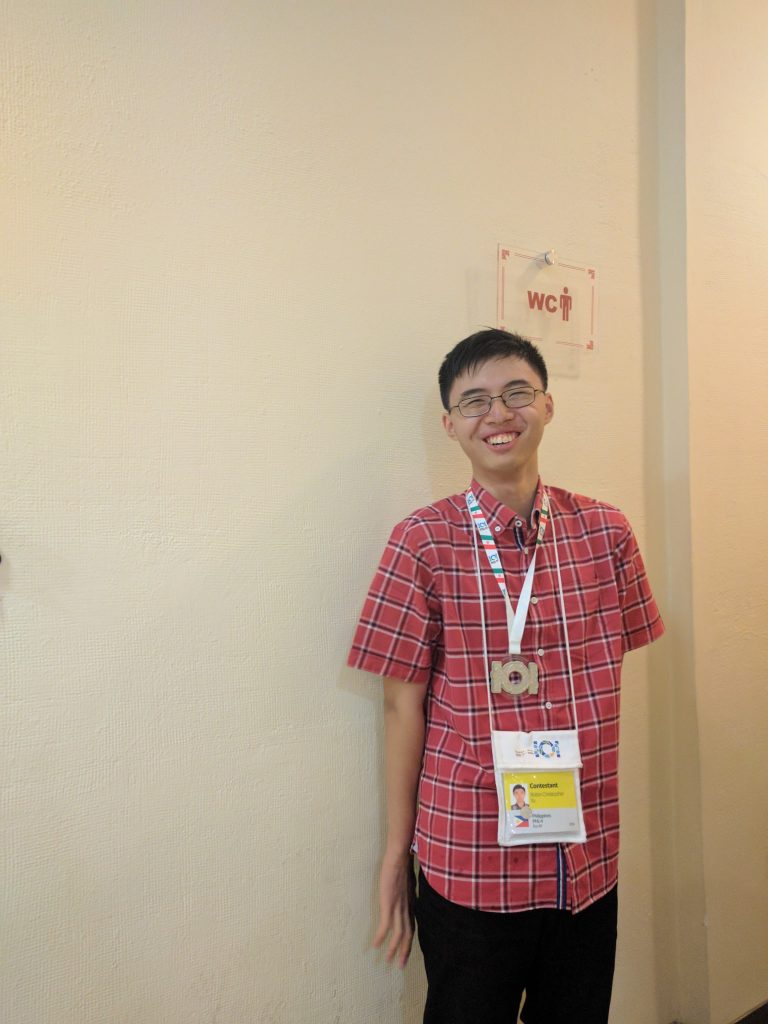 Along with the others, Robin went to the Winners’ Closet after the closing ceremonies. 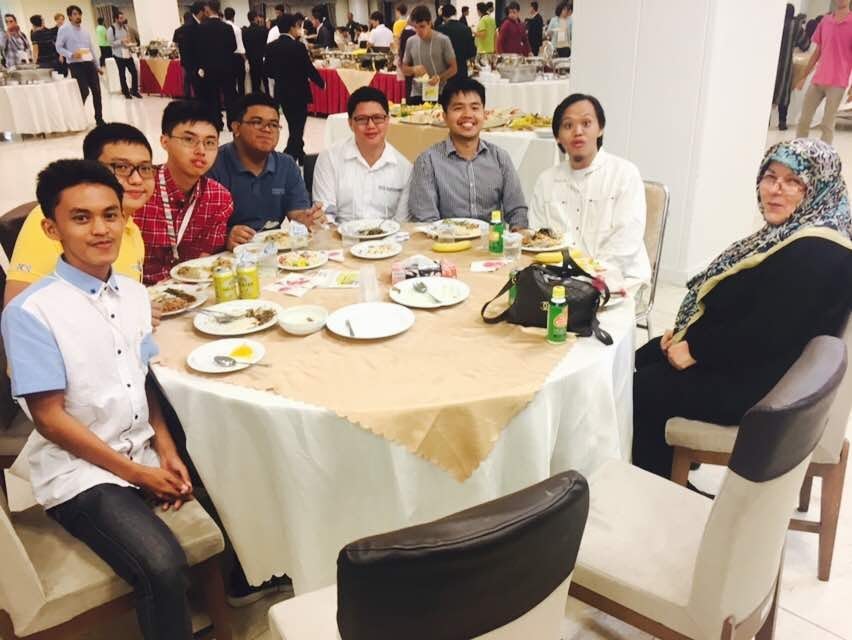 Dinner with one of the grandmothers of the very hospitable Iranian guides. 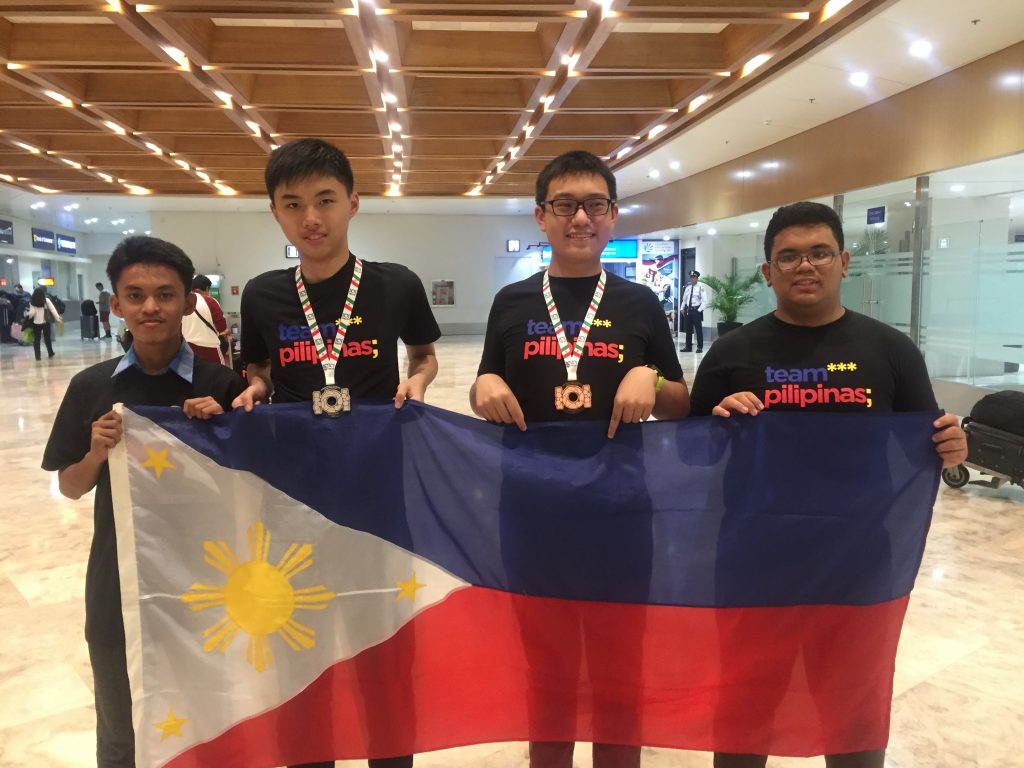 Bringing home the bacon. And by bacon, we mean medals, certificates and memories. Someone snapped a photo of the team from behind, giving a good view of the logos of our generous sponsors.

More photos in this link.

Photos are for personal use only.