Each year, we ask our IOI participants to write a reflection of their experience so that future Filipino IOI contestants will have an idea what it’s like straight from their peers. 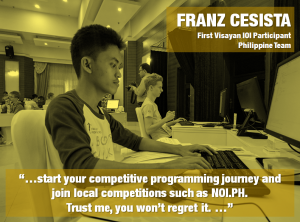 Tehran is just like any other developed city, but also is unique in its own way. The city blends sand, cement, and rocks in a nice smooth gradient sprinkled with beautiful landmarks in view form each other. Even the buildings are desert-themed. The people were also very nice, especially Ate Kimia, our guide. Iran is definitely worth a second visit. It’s a fascinating country with a colorful culture; completely different from what I usually hear about it.

During the contest, I felt like I was a hundred meters deep below the ocean. Even though I prepared for months for this competition and tried to meditate that morning, I still felt the immense pressure. My mind couldn’t rest, even for a minute. “You need to solve this subtask or you won’t get a medal” warned half of my brain and “No, you need to chill, I know you can do it” comforted the other half. They then annoyingly continued this bickering ‘til the end of the contest.

The most interesting problem for me would either be Nowruz or The Big Prize. I’m not sure, really. The first problem was basically just about reducing a graph into a tree with a lot of leaves and the second about some kind of randomized binary searching. These insights needed a flash of genius to come up with. In my case, most of them came to me after the contest. Although it would have been better if they came during the contest, finding the solution is a reward in itself. I still have to train a lot to improve my chances in the future.

I also made some international friends during the event. I had lunch one time with contestants from the Nigerian team and we mostly talked about Codeforces and the IOI itself. When I was about to eat breakfast one morning, I noticed that the cafeteria was already packed, so I had came across to sit beside one of the Argentine delegates. I found a new breakfast-mate.

On the bright side, at least I already now have firsthand experience on how it feels to be participate in the IOI. At least, I’ve become aware of which parts aspects of myself need improvement. Hopefully, in the next IOI, I’ll be more prepared and less affected by the pressure.

None of us here in the Philippine Team was born with a keyboard in hand. All of us started with zero knowledge and did our best to be where we are today. We were raised in different familial environments, taught with different curriculums, and have different goals in mind but what bonded us together was our interest in programming and love for problem solving. If you share the interest, start your competitive programming journey and join local competitions such as NOI.PH. Trust me, you won’t regret it. Ganbate! 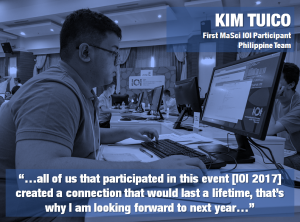 The IOI 2017 that was held in Tehran, Iran gave me a lot of memorable experience that could only occur to events like this. One of these events is when we went to the Opark Complex, a Water Park in Iran. We were thrilled by the park’s slides especially by the free-fall slide. Yet nothing is comparable to the tension I felt when the contest proper had started but as the time passed by, I was slowly making myself comfortable. I think, getting used to a setting like this will help me suit myself to situations similar to this.

This year’s IOI committee did a great job since the competition and the events were well-organized. Aside from learning many things in programming and knowing the culture, places, and cuisine of Iran, all of us that participated in this event created a connection that would last a lifetime, that’s why I am looking forward to next year’s IOI that will be held in Japan.

I would also like to express my gratitude to NOI.PH organizing committee and to the sponsors who supported us in this IOI 2017 journey. 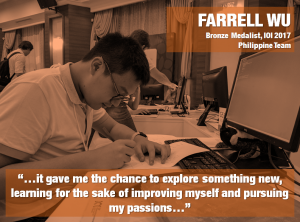 As my seventh and last international scientific olympiad, the IOI 2017, and everything leading up to it, was a truly rewarding experience. NOI.PH and the IOI provided me an opportunity to learn coding and algorithmic thinking. More importantly, it gave me the chance to explore something new, learning for the sake of improving myself and pursuing my passions, instead of merely inertia and fulfilling expectations.

By far, my favorite part of the IOI was the competition itself. Getting into competitive programming during Grade 11 from a mathematical olympiad background, I was in for something different. Unlike the IMO, it is not enough at the IOI to have good ideas: I had to implement them. Getting the correct idea is only 10% of the way there.

The IOI gave me a glimpse into the “engineering” side of STEM. Unlike pure scientific problem solving, the IOI rewards the mindset “if it works, it works.” In fact, the code that pushed me above the medal boundary was a naïve brute force, making me hesitate because I felt it was “ugly” and “suboptimal”. Trial and error were also integral – due to the full feedback format, I could make 25 attempts before finally solving a problem.

That said, there is more to the IOI than the two contest days. The numerous excursions allowed me to explore a different side of Iran, which I would never have seen otherwise. Discussing with fellow contestants, I realized that the problem-solving thought process extends across scientific disciplines, encouraging me to never stop exploring. 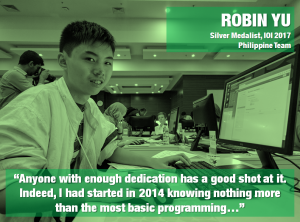 I was initially reluctant to attend this IOI — there were conflicts with the schedule of this and my university, and people around me had thus heavily discouraged my participation — but I decided to go anyway, and I am glad I did so. The places and people I got to encounter were far removed from the predominant impression one would get from western media. I am grateful to have had the experience to visit a different country, with its unfamiliar language and culture. The excursions and programs were relatively well-organized and I thoroughly enjoyed them.

The first day of the contest went as expected; I was quite surprised with my result, as I had ended within the gold medal boundary, and there was significant pressure to fight to remain there. Thus panic started settling in on the second day, when I realized that the problems were not immediately approachable. I had gone two hours in without solving anything, and the stress snowballed and made it difficult for me to focus. My sub-optimal performance on the second day was definitely regretful — I was one key insight away from gold — but at the end of the day, I believe I had done my best.

I hope that someone will carry on the torch and finish what we have started. My experiences in IOI have revealed that winning gold is really not that far-fetched for the Philippines. Anyone with enough dedication has a good shot at it. Indeed, I had started in 2014 knowing nothing more than the most basic programming; I recall clearly solving the problem of sorting three pairs of points with 100 lines of code, considering all possible cases, compared to now where I can do that with less than 5. I hope that my story can serve as an inspiration to those who may want to get into this field.

Of course, none of this would have happened without the generosity of our sponsors. On behalf of the entire 2017 Philippine delegation, I would like to thank them for having supported us all the way. I hope they will continue to support the future generation of Philippine competitive programmers, as we look towards the years to come.